Cadia Gold and Copper Mine

The Cadia Gold and Copper Mine is located approximately 25 kilometers south of the city of Orange in New South Wales, Australia. The mine is operated by Newcrest Mining since 1998 and produces over 25,000kg of gold and over 90,000 tons of copper per year. The Cadia concession consists of a large open pit mine, two underground mines and two tailings storage facilities. 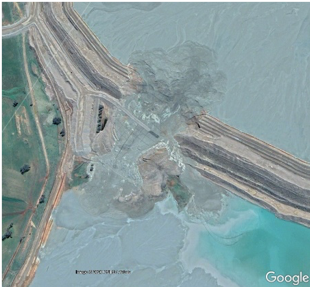 Satellite picture after the collapse of the northern tailings dam.

On the 9th of March, 2018, a tailings dam collapse occurred at Cadia. A part of the dam of the Northern pond collapsed, releasing slurry into the Southern facility. Fortunately, there were not any injuries or pollution associated with the event. It did, however, cause the operations to be suspended temporarily and led to a required reconstruction of the tailings dam. The planning of this reconstruction is estimated to take approximately two years. Furthermore, over the weeks following the event, Newcrest’s stock value dropped by over $1.4 billion as the company’s profit was estimated to reduce by 25%.

The need for monitoring

Health, Safety, Security and Environment play a major role in the mining industry, as small deviations can have large consequences. A key aspect is monitoring the stability of the mine’s infrastructure, such as pit slopes and tailings dams. Individual tailings storage facilities can contain over 10 million tons of residue, making the effects of a potential dam failure very significant. These kinds of events can greatly damage the environment and sometimes even cause fatalities. This calls for monitoring of the stability of these structures. However, conventional monitoring techniques generally require on-site personnel, produce limited measurement coverage and/or can be relatively expensive in the case of high-frequency monitoring. Therefore, using modern, remote monitoring techniques can be very beneficial to the HSSE in mining operations.

“A strong acceleration was observed, approximately 3 months before the collapse.” 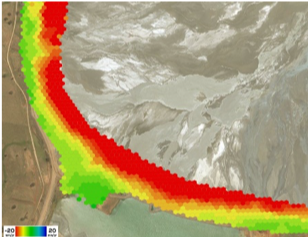 Deformation of the northern tailings dam between 2015 and 2018, observed with InSAR.

InSAR on the Cadia tailings dam

Satellite-based InSAR is such a technique. It allows for remote, weekly-monthly observations of large areas with millimeter precision. This enables precise monitoring of the deformation or subsidence in and around the mining area. After the Cadia tailings dam failure in 2018, we have inspected the deformations visible from the satellite prior to the collapse. With 70 measurements, approximately once every 12 days, this dataset provides a good foundation for retrospective analysis. It was found that the inner part of the dam had been moving with over 20 mm/yr on average at least since 2015. However, after digging deeper into the dataset, it was discovered that this movement had not been uniform over the dam stretch. Whereas the eastern part of the dam showed relatively steady linear subsidence, the part around the collapse showed a more irregular motion. Over there, a strong acceleration was observed around November/December 2017, approximately 3 months before the failure occurred. Interestingly enough, the same acceleration was found to the north-west of the collapsed part.

All in all, it was concluded that the tailings dam failure at Cadia had a precursor in the form of accelerated motion on the inner part of the construction, approximately 3 months before the failure. This was confirmed by Newcrest’s post-event analysis. Based on this InSAR data, the Cadia team could potentially have intervened earlier on in the process, by performing local inspections or by taking precautions. Therefore, InSAR can greatly contribute to highlighting required preventative actions or to detecting potential upcoming failures. This in turn helps lowering costs and increasing HSSE in and around the mine.

Use Sensar for your organisation?

Contact us
Scroll to top
This website uses cookies to improve our site’s user-friendliness and to measure where our visitors come from. By continuing to use our website, you agree to our use of cookies.OK